Our Wandering Wednesday all started with a burger.  A famous one we had to try, rated as one of the top burgers in North Carolina, in the small town of Elizabethtown.  B and I had both been to this little town as children spending summers at White Lake but neither of us had been to their downtown. And we’d certainly not tried this burger!

Melvin’s, which we read about in Our State magazine, sits right in the heart of downtown Elizabethtown, proudly and rightfully displaying their recognition from Our State on their door. And judging by the line when we arrived, we knew there was something to it. There were at least 10-15 people in line when we got there and the line was constantly replaced with more people coming in.  But they are fast so there’s no waiting long!

The staff was so friendly and the ladies from the register to the bagger who calls out “5 on the flat top” (not that we ordered 5 and not that we couldn’t have!) and wraps your order up in a flash, to the ladies cooking and preparing the food, they were in sync like I’d never seen.  It is a science.  We had read that they would hand you your order before you could finish paying and they did!

Now to the burger.  I love that they are just what we’d call good ol’ hamburgers and cheeseburgers with nothing but mustard, chili, slaw, and onions.  They will tell you if you want anything else added, you are in the wrong place, including no fries, no tater tots, just chps and a drink!  They serve it the way they serve it and it is clearly beloved because people start coming in when the doors open at 7:30 in the morning, not only to eat, but to grab a dozen for the beach or to save for lunch.  And while we were there, we had to try a hot dog, and it was as good as the hamburger!

You really need to read this article if you haven’t, it is a great story about their history and the memories over the years, and they’re definitely worth a drive to try their delicious food!  Melvin’s in Our State Magazine and a link to their restaurant down below.

After lunch, we strolled their little downtown, and enjoyed the shops from consignment stores to antiques, gift shops (with mostly local artists’ creations), and clothing stores.  We could have come home with a lot but we chose a beautiful Christmas sign for our front door and a purse for yours truly!  We also stopped in at a cute and quirky coffee shop, Barefoot Brew, for lattes (or Witches Brew as they say this time of year!) and they were delicious and the staff was hometown friendly.  Have I told you we love finding cool coffee shops?!  We do!

While Elizabethtown is not a large downtown, you will enjoy a full block of several eating options and shops, and coffee and sweets, and you will not be disappointed.

After we left downtown, we headed to White Lake for a trip down memory lane.  It was bittersweet to see how much it had changed in the decades since we’d been, but yet, it was still so familiar.  When we walked out on to Goldston Pier, the water was what we knew.  That clear water going in a few feet that changes to the depths of blue a little further out – we both remembered that only the ‘big kids’ could swim in the dark blue.  I was never brave enough as a kid!

As we headed back towards home, there was one more stop we had planned to make, and we almost talked ourselves out of it because we’d already had a long day. Let me just say, it was worth the additional excursion!

Sunni Skies Homemade Ice Cream was also featured in Our State magazine and is located in Angier, North Carolina.  Being cool and the time of year it is, however, we kind of expected they might be closed, or we at least felt they would not be busy on a cool Wednesday afternoon. But we were wrong.  They had many cars in the parking lot and we quickly found out why!  With over 100 homemade ice cream flavors, it is hard to choose which one you want, but they let you sample anything you’d like. They even have two for which you have to sign a waiver – we didn’t try those!  I finally settled on a new flavor called Butter Espresso, with whole espresso beans in it (whew!), and B had his favorite, Black Cherry.  They – were – both – so – good that this place is worth driving to just for an afternoon treat!

We had a full day in our beautiful home state seeing places we’d never seen, had a trip down memory lane, and got home tired and happy.  That’s what it’s all about!

LINKS to our adventure: 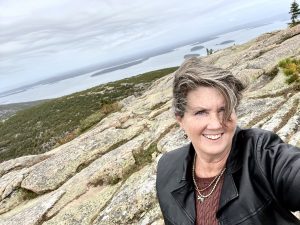 You’re kind of crazy too? Oh good, let's be friends!

Subscribe to my email list to receive the latest updates on our travels, food food, my writings, and more!